Roma Tomatoes - All you need to know about them

You’ve seen them in most supermarkets. They’re called Roma tomatoes: egg to pear-shaped, with a chewy flesh and a sweet taste, Romas are a type of plum tomatoes, known primarily for making great tomato sauce.
The Roma tomato is, in fact, among the most common types for producing tomato sauce, and quite a popular one for that matter. 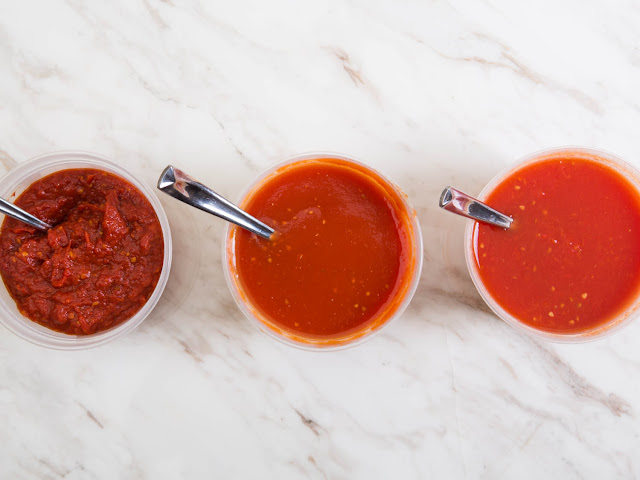 Know Your Roma – facts and history
Although tomatoes go as far back as the Aztecs, who are deemed to have developed the original fruit, Roma tomatoes were introduced much more recently.
During the early stages of the industrial agriculture in the United States, when shipping across longer distances became possible and the demand for fruits and vegetables grew, so did the need to harvest more durable produce.

Roma tomatoes came about as the result of a mutation in genes, namely the SUN mutation that gives the fruit its elongated shape. It is known that SUN arose in Europe, but it’s uncertain whether or not it came from Italy. Nevertheless, when introduced in the United States, the fruit adapted quite well and quickly became one of people’s ideal choices for canning, dehydrating, salsas and sauces.

Roma tomatoes particularities
Roma tomatoes have thick skin that makes them more resistant to environmental damage and thus less likely to crack, which is one of the reasons they were bred that way.
There are two main advantages of thick skin when it comes to Roma tomatoes:
- One, a thick skin helps with preserving the tomatoes more efficiently and it also peels off more easily.
- Second, it holds better when the fruit is dried or dehydrated.

The Romas are known as a sauce type tomato precisely because of their meaty flesh and the low moisture content, characteristics that make them ideal for cooking into a thick paste or sauce.
Although not particularly sweet or flavorful, they benefit from a more intensified taste when cooked, the cooking down process usually enhancing their slightly sweet flavor.

Roma tomatoes nutritional value and benefits
Bright red, Roma tomatoes are rich in lycopene, the inherent tomato pigment that is also a powerful antioxidant known to protect against cancer and lower cholesterol.
Lycopene is a carotene and carotenoid pigment, one of the free-radical fighting antioxidants that destroy free radicals. Tomatoes, Roma tomatoes particularly are one of the best sources of lycopene, one serving size of tomato juice (250ml or 1 cup) containing 25.0mg.

Note: It’s when tomatoes are cooked and paired with fat that lycopene levels increase, thus the best way to make the most of Roma tomatoes, nutritionally speaking, is to consume them cooked – for example, pasta with marinara sauce is a staple food to add to diets for increasing lycopene.
In addition to lycopene, Roma tomatoes contain a decent amount of potassium, fiber, iron and B vitamins.

How to use Roma tomatoes
There are many applications to Roma tomatoes in a diet.
- Although mostly used for canning and sauces, Roma tomatoes are great for adding to salads and omelets.
- When dried, they make a wonderful addition to bread dough and sandwiches, either vegetarian or meaty.
- Roma tomato smoothies and fresh juices can be incorporated into a weight-loss diet. The juice can also be canned for all-year use.
- The meaty flesh makes a perfect tomato soup that can be prepared according to taste and preferences: sweet, spicy, garlicky etc.
- Roma tomatoes also compliment meat dishes and stews very well, Italians often flavoring dishes with either fresh or canned tomatoes.
- Sun or oven-dried Roma tomatoes can be used as pizza topping.
- They can also be eaten raw.
Posted by Georgia at 2:25 AM No comments:

In a world where competition is fierce even (or especially) when it comes to the retail industry, customers look to every single possibility out there to get the best results with their shopping.
At the same time, supermarkets continue to invest in new ways to attract customers. Some supermarkets deliver at home, while others go about ensuring a stronger ecommerce presence.

Kroger, for example, is testing a service called Click List. This service allows customers to buy groceries online and then collect at the store where employees would have them ready at a designated time. It’s very convenient - especially since shoppers are not even required to go into the store to pick up the items because everything is processed at a pickup window.
However, shopping at Kroger can save more than just time. It saves money too. The following are some of the best ecommerce ways you can shop wisely at Kroger to help you save a lot:
You can get the Kroger Plus Card at your local customer service desk by filling out a form. No need to worry, it’s a very short one.

If you use, and you should, the Kroger Plus Card every time you shop, you’ll get even better sale prices from them.
Once you have the card, the next step is to activate it on the Kroger website because the supermarket does not only send coupon booklets frequently, but they also send you personalized coupons based on previous purchases.
Many shoppers were disappointed to find that Kroger no longer duplicated savings on paper coupons, but there’s even a more efficient way to use Kroger coupons and this particular type doesn’t come with your usual Kroger ad.

Issuing eCoupons is one of the ways Kroger is striving to bring the ways it relates to its customers into the 21st century. First, obtain a Kroger Plus Card – because that is where you will download the coupons, then create an online account with the company.

The Kroger application is free for Apple and Android. You might be thinking about why you would need another app on your phone; but this one is quite useful.
The Kroger app is going to give you deals in the Kroger weekly ad, plus you can create shopping lists by tapping on particular items that show up in the app’s weekly circular. As a bonus, if there are any coupons associated with your items, these will also show up right below the pictured items. If it’s a sale item, and you receive coupons for it, then you’ve doubled your savings.
Another ecommerce strategy from Kroger is their “Free Friday Download” deal. Every Friday, Kroger sends an email to announce that week’s free product from them.

The deal is in the form of a coupon that you need to load unto your card, and this offer is only available to customers who have an account with Kroger. The coupon doesn’t have to be redeemed straight away, but Kroger does restrict its use to within two weeks’ time.

If you don’t have a Kroger account, you can still view each week’s new offer by visiting this page. And if you’d like to scroll through some of their digital coupons just to see what kind of deals they have for what kind of products, you can go here. You can browse coupons by category or sort through them by checking either one of the available options.

Posted by Georgia at 4:45 AM No comments:

Some of my favorites were:

#18- I found this to be really comforting...I'm searching to start a career and I am worried I might choose the wrong one or just be bad at it...I have also been struggling with some life decisions like grad school and other things, so it's nice to be reassured that it's ok to mess up and it's ok to not know.

#19- Lovely reassurance that it's ok to make some mistakes, don't keep thinking about them...live!


Hope you all enjoyed this list!
Posted by Georgia at 2:15 AM No comments: